The Princeton Senior Resource Center is a community nonprofit whose mission is to help older adults thrive. We offer programs for enrichment and lifelong learning, no-cost social services and resource referrals, and much more. We rely on the generosity of individuals as well as community and corporate partners to support our mission. The spring fundraiser is our signature fundraising event throughout the year and a critical part of our funding plan. Like many organizations, we have moved online to promote community health and care for the vulnerable in our community. We are grateful for your continued support!

Join us for a special event with 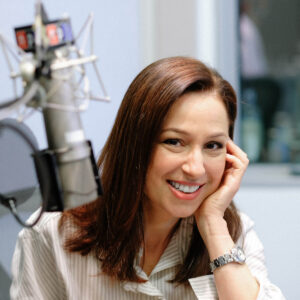 Manoush Zomorodi is the host of NPR’s TED Radio Hour, a podcast exploring the biggest questions of our time with the help of the world’s greatest thinkers.

In 2013, Zomorodi created, hosted, and was managing editor of Note to Self, a podcast out of WNYC Studios for “anyone trying to preserve their humanity in the digital age.” The podcast received wide acclaim, including being named Best Tech Podcast of 2017 by the Academy of Podcasters. In 2019 Note to Self moved to Luminary Podcasts with a season of new episodes. In late 2019, NPR named her the new host for the TED Radio Hour.

In 2015, Zomorodi led tens of thousands of listeners through an experiment to help them unplug from their devices, get bored, jump-start their creativity, and change their lives. Her book Bored and Brilliant: How Spacing Out Can Unlock Your Most Productive and Creative Self builds on that experiment to demonstrate how to rethink our gadget use to live better and smarter

Through her career, Manoush Zomorodi has won numerous awards, including The Gracie in 2014 and 2018 for Best Radio Host. She is especially proud of the Webby her team won in 2018 for “The Privacy Paradox.” Her audiobook reading of Bored and Brilliant won her the AudioFile Magazine Earphones Award (“Zomorodi’s melodic voice beckons and inspires listeners”). In 2020, she also received a Webby in 2020 for Best Podcast Host and the Leadership in Media award from Mouse, the tech nonprofit for youth education.

In 2017, she gave a TED Talk about surviving information overload and the “Attention Econ­omy,” which now has over six million views. Fast Company named her one of the 100 Most Creative People in Business for 2018. Prior to her work in podcasting, Zomorodi reported and produced around the world for BBC News and Thomson Reuters.