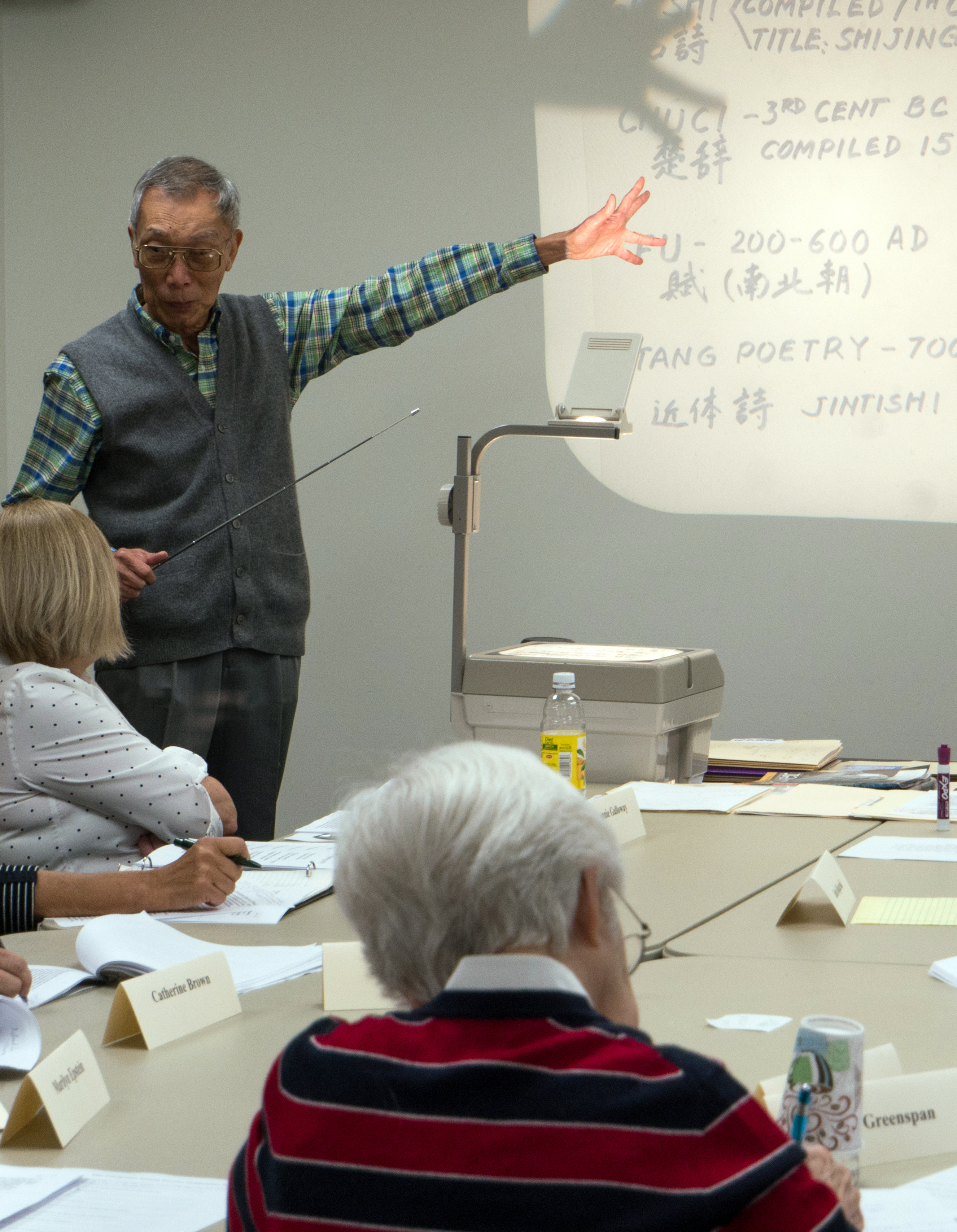 My head is full of ideas when I leave this class; I can’t wait to come back next week.

ALL COURSES WILL BE HELD ON ZOOM, EXCEPT WHERE NOTED.

Courses begin the week of February 28

Slavery in New Jersey may surprise many people. A study of slavery in this region begins with the transatlantic slave trade and traces local African American families from enslavement to emancipation, property ownership and settlements, the influence of the Black Church, and the impact of the 13th, 14th and 15th amendments; concluding with nineteenth century and contemporary civil rights movements in our local communities.

What do you see when you look at a work of art? As a rule, each of us sees something different. We all approach art from our own unique vantage point — from our own angle. In this course, docents from the Princeton University Art Museum will lead students through wide-ranging discussions of their reactions to different works of art. Each week will focus on a different topic using the Museum’s extensive collection as a backdrop. The course is a follow-on to the course with the same name given in the fall — topics will be different and no need to have taken the prior course.

The sonnet remains one of the most vigorous poetic forms. What gives the sonnet its power? This course will analyze the basic elements of the sonnet and their importance. Next, the many mysteries surrounding Shakespeare’s sonnets will be reviewed, and the best of these sonnets for content and meaning will be studied. The history of the sonnet will be discussed through some of the greatest sonnets written from Donne, Milton, Wordsworth, Browning, to the modern sonneteers such as Millay and Yeats. Finally, class participants will be encouraged to discuss their own favorites, which may be their own originals.

Many argue that writing a short story is more challenging than attempting a novel: the best of short fiction can pack in a small world of thought and perception within a few pages. This course features stories generally readable in thirty minutes or less and are consistently considered the best in modern U.S. fiction. Works are by Ernest Hemingway, Octavia Butler, Raymond Carver, Flannery O’Connor, Javier Marias, Ted Chiang, Joyce Carol Oates, and George Saunders. Author insights, read-out-louds, and active class discussion.

There is more misinformation and deliberate deceit in politics, advertising, health claims, and news reporting than ever. There is a need to be able to protect ourselves from acting on disinformation and to be alert to misleading errors. A functioning democracy requires a populace prepared to understand and challenge claims of fact in political statements. Misunderstanding data or probability can have fatal consequences. Often misinformation is false or biased data, but just as often it is in the way the numbers are selected or presented. Graphs and charts can be misleading as a picture speaks more directly to our emotions. The goal of these talks is to cultivate a healthy skepticism so that statistical sleight of hand, innumeracy, and fallacies can be better detected. This course does not require high school math, just basic arithmetic and common sense.

American Foreign Policy during the Cold War and the War on Terrorism — covering diplomacy as it impacts national security, human rights, economic development, the environment, and international trade.

Condoleezza Rice once described President George W. Bush’s Middle Eastern policy as “muscular” Wilsonianism. This course will review a century of American policy toward the Middle East, starting at Wilson’s Fourteen Points and the beginnings of the anti-colonial movement and continuing through World War II and Franklin Roosevelt’s last major trip after Yalta to meet with the “Three Kings.” We will then turn to the Truman Doctrine, the Iranian Revolution, and the end of the Cold War just prior to the first Iraq War. We will conclude with 9/11 and the War on Terror through the present.

This four-week course will study the geology of the Princeton area, including the geological formations and rocks of the municipality, as well as the building facades on the Princeton Campus.

Middlemarch is arguably the greatest nineteenth century English novel. It relies on romance plots, but it also explores many other kinds of adult experience — parenting, unhappy marriages, careers gone well or not, political and social reformism; Virginia Woolf called it “one of the few English novels written for grownup people.” We will read the novel slowly and carefully, focusing on characters and relationships, but we will also discuss its attitudes toward social, political, and scientific progress, as it looks back from the perspective of the latter half of the nineteenth century on the great age of reformist enthusiasm of the 1830s.

This science-oriented class will look at a number of global changes: plate tectonics, the human population, biodiversity and mass extinctions, climate and climate change, and issues of social justice as the world warms. The course will end with a look at a few methods that we as humans can employ to moderate future climate change.

This nine-session course is a roundtable discussion centered on nine important issues of American foreign policy as selected by the Foreign Policy Association. Each class will have a number of opening questions, followed by robust group discussion, moderated by the facilitator. Basic information on each topic will come from the Great Decisions 2022 briefing book, supplemented by other materials. Most importantly we will rely on the unique life experiences and perspectives of class members.

The course discusses the history of folk music as it has evolved in the U.S. and Canada primarily. Topics will include Child’s Ballads, Broadside Ballads, Blues, early protest music, political, economic, and social influences of folk music in general and on such groups as The Almanac Singers and The Weavers. David will bring his guitar and provide examples of different folk styles and songs personally and also invite some fellow musicians to come to class and do so as well.

The course will be an interactive journey through the twentieth century’s greatest novel, James Joyce’s Ulysses. We will combine lecture, discussion, and performance to bring alive the joy, humor, pathos, and art of this livelong to human nature. It is assumed that this will be your first time through the novel. If it is not, you will be happy to meet some old friends in the pages.

Two writers so famous — or infamous — in their own times and ours that their names are icons. We’ll read Wilde’s plays The Importance of Being Earnest and Lady Windermere’s Fan, as well as a selection of his witty, paradoxical, and profound essays. (And possibly some transcripts from the trial that sent him to Reading Prison for two years at hard labor for the crime of being gay). And we’ll read Shaw’s daringly contrarian plays, Mrs. Warren’s Profession, Man and Superman, and Major Barbara. Each in his own way was a champion of social justice; each wielded the sharp weapon of comedy against the false pieties of the old Victorian age.

This course is designed to be enjoyed by opera newcomers and those knowledgeable about opera. Seven sessions will consist of lectures with extensive videos. The first of these sessions introduces opera singing, its history, and techniques. The subject matter of the next six sessions includes Baroque opera, Haydn’s oratorio The Creation, Beethoven’s “Ode to Joy”, adaptations of literary works (Billy Bud and Othello) into operas, the history of Black artists in the American opera world, and opera in film. The eighth and final class session will be devoted to questions, comments, and discussion.

The Role of Philanthropy in Democratic Society — can Bill Gates and Mark Zuckerberg save the world through philanthropy?

Inspired by the People and Stories / Gente y Cuentos program founded by Sarah Hirschman in 1972, participants in this online series will read and discuss a different short story each week for eight weeks. The story selections, by writers like Chinua Achebe, Chimamanda Ngozi Adichie, Louise Erdrich, Gish Jen, James Joyce, Jamaica Kincaid, Gabriel Garcia Marquez, Tim O’Brien, Tillie Olsen, Hernando Tellez, and Alice Walker, embody the best qualities of enduring literature: rich in artistry, they revel in life’s complications, wonders, and ambiguities. No preparation is required. Copies of each story will be distributed to participants before every class. After hearing it read aloud during the online session, they will be encouraged to examine the issues and themes; tensions and contrasts; shadows; poetics; sounds of each story and, perhaps of most interest right now, how these stories resonate with this challenging time in all of our lives. All ages and backgrounds are welcome; diversity is critical to meaningful conversations.

What does it take to understand buildings? From the outside, as we first confront them? From the inside, as we experience them? We can understand buildings in simple, pragmatic terms — how they work for what they are supposed to do — or we can understand them as architecture. This course is a brief introduction into the logic of architectural form and space — the phenomena, the principles, characteristics, geometries, and themes at the basis of making and understanding architecture — irrespective of time. It will seek to define the “definable” while acknowledging that much of the soul-stirring power of architecture eludes definition.

The focus of the course will be a close reading of Lolita, along with attention to Nabokov’s autobiography, short stories, and critical writings. Class participation is welcome and encouraged.

Science in the News is a course designed for all those who wish to become more informed about current scientific and medical topics. A panel of scientists will present two weekly talks covering a wide range of fields. The panel strives to lecture at a level easily accessibly to people of varying backgrounds (scientific or otherwise) and current knowledge. A variety of sources are used, and pertinent references are provided for each of the topics covered. All are welcome, regardless of experience. Presentations by class participants are encouraged but not required.

School emphasized Greece, Rome, Bible and Church as the pillars of Western Civilization. Yet there were many more. Alexandria, Egypt was the world’s center of learning and scientific discovery. Islam’s “Golden Age” attained intellectual brilliance that indispensably linked classical Greece to the Renaissance. During “Dark Ages” Spain achieved social integration and living styles that predominate today. “Barbarians” established governments, selected bishops, eliminated Roman slavery and infanticide, and created today’s written grammar and form. Byzantium joined East and West. Vikings developed a commercial network through Europe and Asia. This course describes these and other “Shrouded Pillars” on which our civilization stands.

This lively discussion course will consider books by, for, and about gutsy seniors — Margaret Atwood’s The Stone Mattress, Sigrid Nunez’s What Are You Going Through?, Lionel Shriver’s Shall We Stay or Shall We Go, Roz Chast’s Can’t We talk of Something More Pleasant, and James McBride’s Deacon King Kong.

Early in Don Quixote, Part II — the 1615 “sequel” to the 1605 Part I — Cervantes writes: “Second parts are never very good.” But this particular second part is an exception to the rule as Cervantes moves from a focus on satire and explorations of narrative possibilities, to a true metafiction: a fiction that has itself as a subject. Don Quixote even recognizes himself as a literary character, at the same time that many others in Part II, as readers of Part I, tailor their responses to him according to what they have read. Reading Part I of Don Quixote is not a prerequisite for this class, but is helpful.