Various nonprofit organizations and government agencies will be giving five different informational sessions about their social services and programs. There will be up to three different agencies scheduled in a one hour time slot. Each agency will speak for fifteen minutes and at the end there will be a Q&A for the presenters. The Zoom link will be the same for all of the presentations listed below, so you only need to register one time. You will be able to submit questions in advance on the registration form.

The COVID-19 pandemic provokes a lot of emotions in us all — anxiety, stress, sadness, amongst others. However, it is also a time of collective sorrow. We are all losing something, particularly, our sense of predictability, control, justice, as well as the belief that we can protect our loved ones. Linda Kanner, LCSW explores these topics and how to cope with some of these losses.

In a world of stress, health challenges, and disconnected families, Jewish Family & Children’s Service (JFCS) of Greater Mercer County offers comprehensive social services for people of all ages and backgrounds. The agency’s core programs include mental health counseling and support, senior services, food pantry and food distribution services, and community programming. In response to COVID-19, JFCS has made our mental health resources even more accessible to the community with free drop-in phone hours offered every weekday, free webinars and virtual groups, as well as transitioning all clients to tele-therapy.

Linda Kanner, LCSW is a licensed clinical social worker in both NJ & PA. She has worked for JFCS in Princeton for the past eleven years, with individuals, couples, families, and groups. She teaches in the social and behavioral science department of Bucks County Community College. Linda has worked in many different settings, including schools, hospitals, and Naval Station Philadelphia.

Wednesday, October 7, 12:30 p.m.
Join Dr. George DiFerdinando, chair of the Princeton Board of Health, for this virtual town hall meeting where we will discuss the current state of the COVID-19 pandemic in our area, the Impact of the coming flu season, and much more.

A total of over 200 professional and support staff are employed by Princeton Orthopaedic Associates to assist with your care. This includes twenty-six physicians, seventeen orthopaedic surgeons, one non-operative Sports Medicine, five physiatrists (physical medicine doctors), and three podiatrists.

Dr. David Csillan, MS, LAT, ATC
David Csillan serves as Physical Therapy Manager for Princeton Orthopaedic Associates. He joined the group after twenty-nine years as the athletic trainer at Ewing High School in Ewing, New Jersey. Additionally, he provides medical services to the TCS New York City Marathon and Special Olympics New Jersey. He is a national authority on heat acclimatization in athletics and has presented on this topic through many national television, radio and newspaper media outlets. In 2018, David coordinated the development and mandate of several New Jersey State health and safety policies focused on decreasing catastrophic athletic injuries in secondary schools. Over the years, he co-authored several National Athletic Trainers’ Association position and consensus statements pertaining to exertional heat injuries and the prevention of sudden death in athletics. He is a member of the Korey Stringer Medical and Science advisory board, Athletic Trainers’ Society of New Jersey secondary schools committee, and the New Jersey State Interscholastic Athletic Association sports medicine advisory committee.

Forming long-term relationships with glaucoma patients and helping maintain the quality of their lives are some of the most rewarding parts of being an ophthalmologist in the Princeton and Monroe Township, N.J., areas, Dr. Colleen Coleman says. “It is important that individuals maintain functional vision as they get older to remain independent, and I see that as a critical part of what I do as an eye doctor.“ Women and men from Princeton and throughout New Jersey come to Outlook Eyecare to be treated by Dr. Coleman, who is a board-certified ophthalmologist specializing in glaucoma treatments. She’s also an experienced cataract surgeon.

Before arriving at Outlook Eyecare in 2009, Dr. Coleman was head of glaucoma treatment at a large practice in Philadelphia, where she also was a clinical instructor for residents at Wills Eye Institute.

Arm In Arm is a place where our community comes together to make sure we all have the most basic needs of food and shelter and, as possible, the livelihood to maintain them. We believe that it takes our whole community to ensure that everyone thrives. And we believe that when everyone is thriving, we all benefit.

Arm in Arm has a food pantry where clients can call and make an appointment to come and pick up a bag of groceries, a bag of frozen meats, and a bag of fresh vegetables. They have senior hours on Mondays from 1:00 p.m. to 4:00 p.m. Other days and hours for our community in general. They also distribute food to home bound and people with disabilities twice a month, on the first and third Thursdays. In addition to these services, they offer back rent, security deposit, or utilities financial assistance. They offer case management and have a payee program, especially for families or seniors with fixed income as SSI, can be enrolled in this program.

Kalea T. Edmundo, Esq. is a senior staff attorney at Central Jersey Legal Services, Mercer division. She handles estate planning for seniors, family law, and landlord/tenant matters. Kalea received her B.A. in criminal justice and her M.A. in public administration from Fairleigh Dickinson University. She earned her law degree from the University of the District of Columbia, David A. Clarke School of Law. Prior to attending law school, Kalea was the assistant director of Volunteer Lawyers for Justice and the executive director for Court Appointed Special Advocates (CASA) of Somerset, Hunterdon, and Warren Counties. While in law school, she participated in legal clinics where she advocated on behalf of students with special education needs and people affected with HIV/AIDS with family law issues. Prior to her time at CJLS, Kalea was a staff attorney at Volunteer Lawyers for Justice primarily practicing in family law. Kalea is a member of the NJSBA, Mercer County Bar Association, and Essex County Bar Association. Kalea is on the statewide advisory committee on diversity, inclusion, and community engagement for Mercer Vicinage. Previously, Kalea was the secretary of the Essex County Bar Association Young Lawyers Section and a pupil of the Barry I. Croland Inns of Court. Kalea is admitted to practice in New Jersey and the District of Columbia.

Surrogate Diane Gerofsky was born and raised in the City of Trenton. She attended the Trenton public schools and Douglass College, Rutgers the State University, graduating with a Bachelor of Arts degree in sociology. Upon graduation Ms. Gerofsky took a position with the Bureau of Childrens’ Services, State of New Jersey Department of Human Services, where she served as a social caseworker. Ms. Gerofsky, in the late 1960s turned to the field of teaching and held positions with the Trenton Board of Education. Changing careers in the early 1980s she entered the field of business and legal administration where she remained until 1996. Ms. Gerofsky was elected to her first term as the Surrogate of Mercer County in 1996; re-elected to a second term in 2001; re-elected to a third term in 2006; and re-elected to her fifth term in 2016.

Surrogate Gerofsky has been an untiring community activist. She is a member of the New Jersey Federation of Womens’ Clubs (The Contemporary Club of Trenton), past treasurer and current member of the League of Women Voters – Lawrence Township, a member of the Trenton chapter of the NAACP, a member of the Urban League Guild of Union County/Trenton Chapter, and the 200 Club. She is past class president of the Douglass College, Rutgers the State University, Class of 1967.

Surrogate Gerofsky has been honored by the Greater Trenton Area YMCA as Mercer County Volunteer of the Year 1999, the Puerto Rican Parade Committee of Trenton Appreciation Award 1999, the Business and Professional Women of Trenton – Volunteer of the Year 1999 and the Fraternal Order of Police Lodge # 140 (Sheriffs)- Appreciation Award 2000, the League of Women Voters Lawrence Township- Woman in Government 2002; the NAACP Trenton Chapter President’s Award 2003, and New Jersey Federation of Colored Women’s Club, West Central District #1 as Outstanding Citizen 2006.

Through advocacy, leadership, and collaboration, the Department of Human Services helps to improve the quality of life of individuals in our community who are vulnerable, economically disadvantaged, or otherwise in need.

The Department of Human Services coordinates and administers programs and services to the various population groups in need. The scope of services supported and provided by the Human Services Department includes programs that assist residents with limited income and resources in the areas of financial assistance, employment, housing, and emergency assistance. The department also serves the community as an information and referral source for residents in need of various services.

Melissa Urias is a licensed social worker in New Jersey and currently the director of Princeton Human Services. She has been with the Municipality for the past four years, working for affordable housing and human services. Melissa received her Master of Social Work at Fordham University, with a concentration in community based leadership.

FLU SHOT CLINIC — BY APPOINTMENT ONLY, NO WALK-INS 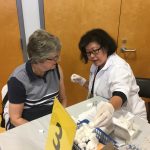 Tuesday, October 13, 1:00–6:00 p.m.
Help Princeton fight the flu!
To schedule an appointment, please contact the health department (not PSRC) at 609.497.7609. To ensure safety, everyone is required to maintain social distancing and wear a mask. Strict Covid-19 guidelines will be followed. Free flu shots will be provided to uninsured Princeton residents and high dose vaccines are available for seniors.

Please contact the health department (not PSRC) at 609.497.7609 to schedule appointments.